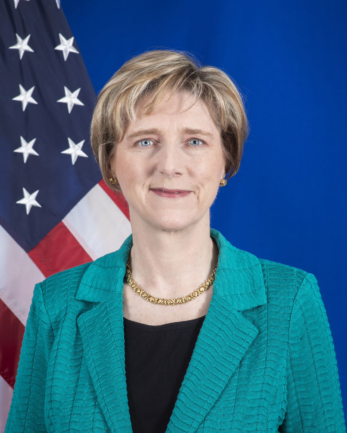 Laura F. Dogu is the U.S. Ambassador to the Republic of Honduras.  Previously she served as the Foreign Policy Advisor to the Chief of Staff of the U.S. Army and at the Federal Bureau of Investigations as the Deputy Director of the Hostage Recovery Fusion Cell, an interagency group of law enforcement, diplomatic, military and the intelligence experts responsible for the recovery of U.S. persons held hostage abroad.  She was the U.S. Ambassador to Nicaragua from 2015-2018, responsible for the bilateral relationship during a time of violent civic unrest.  Earlier, she served as Deputy Chief of Mission at U.S. Embassy Mexico City where she managed the many different facets of the complex U.S.-Mexico relationship, one that involves nearly every agency of the U.S. government.  Ambassador Dogu is a career member of the U.S. Foreign Service with the rank of Career Minister.

Other overseas assignments include the U.S. Consulate General in Ciudad Juarez, Mexico, and the U.S. embassies in Turkey, Egypt, and El Salvador.  Washington assignments at the Department of State included Deputy Executive Director of the Bureau of Consular Affairs, and Operations Center Watch Officer.  Ambassador Dogu received an M.S. from the Industrial College of the Armed Forces in Washington, D.C., and an MBA, BBA and B.A. from Southern Methodist University, Dallas, Texas.  She is the recipient of numerous honors, including a Presidential Merit Award and the James A. Baker III and C. Howard Wilkins Jr. Award for Outstanding Deputy Chief of Mission.  Ambassador Dogu speaks Spanish, Turkish, and Arabic.