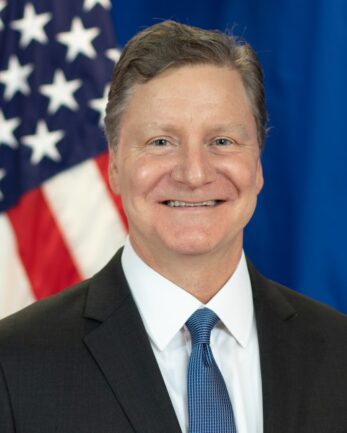 A Career Member of the Senior Foreign Service, Roy Perrin arrived in Honduras in August 2022 to begin work as the Deputy Chief of Mission. He was most recently Economic Counselor for U.S. Mission Turkey and before that the Deputy Director of the Office of Central American Affairs in Washington.

Mr. Perrin has also served as Deputy Consul General in Erbil, Iraqi Kurdistan Region, and as Chargé d’Affaires, and Counselor for Political, Economic and Narcotics Affairs at the U.S. Embassy in San Jose, Costa Rica. In China, Mr. Perrin was the Economic and Labor Officer at the U.S. Embassy in Beijing and Acting Consul General in Chengdu. He has also served overseas in Venezuela and Thailand, and in the State Department’s Operations Center.

A native of New Orleans, Louisiana, Mr. Perrin earned a Bachelor of Engineering degree from Vanderbilt University in Nashville, Tennessee, and worked as a mechanical engineer at Avondale Shipyards in Avondale, Louisiana. He then entered law school at Tulane University in New Orleans, where he served as Editor-in-Chief of the Tulane Maritime Law Journal. After earning a J.D. from Tulane Law School with honors, Mr. Perrin practiced law in San Francisco and New Orleans, specializing in the defense of corporations in class action and product liability litigation. He entered the Foreign Service in 1999. He is married to Michele Perrin, also a native of New Orleans, and they have one daughter, Isabel.

Tweets by the U.S. Embassy in Honduras