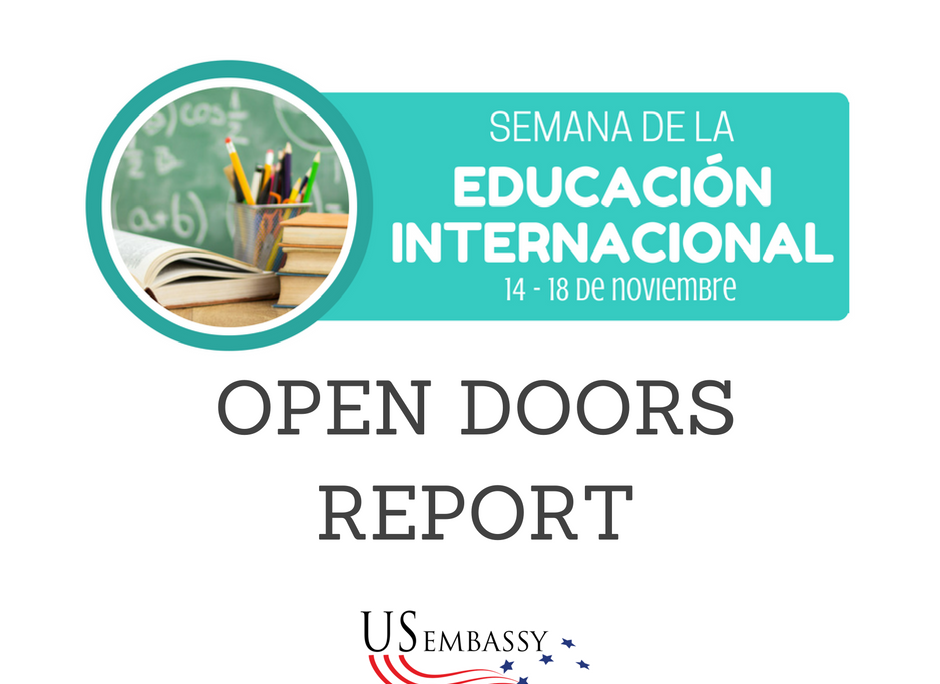 TEGUCIGALPA – The number of Honduran students enrolled in U.S. higher education increased 12.8 percent, to 1,985, according to the 2016 Open Doors Report on International Educational Exchange released yesterday, the greatest percentage increase for all of Mexico and Central America. Honduras sends more bright promising students to the U.S. than any other country in Central America –more than Costa Rica, Nicaragua and Belize combined.

“It is truly remarkable that not only does Honduras continue to lead Central America in the number of students it sends to study in the U.S., but the year on year growth is also the fastest in the region,” remarked U.S. Ambassador James Nealon. “These educational exchanges do not only benefit the students and teachers directly involved, they contribute to the long-term development of Honduras and the United States and the bonds of respect and friendship between our two countries.”

The number of international students at U.S. colleges and universities surpassed one million for the first time during the 2015-16 academic year—an increase of seven percent from the previous year to a new high of nearly 1,044,000, representing five percent of the total student population at U.S. institutions.

“We need to empower more of America’s future leaders to experience the world beyond our borders,” remarked Evan Ryan, Assistant Secretary of State for Educational and Cultural Affairs at the U.S. Department of State. “International education helps people develop the knowledge and skills needed to succeed in today’s global economy, and creates networks across borders that improve international understanding and strengthen the national security of the United States.”

The U.S. Embassy in Tegucigalpa and its EducationUSA office are working hard to make sure that even more Hondurans have the opportunity to pursue a U.S. education. For International Education Week, November 14-18, the Embassy and EducationUSA are sponsoring information sessions for high school and undergraduate students interested in studying in the US at 5:30pm and 6:30pm on Thursday, November 17, at IHCI, Plaza Criolla. The Centro Cultural Sampedrano in San Pedro Sula will also host a series of information sessions and webinars from Wednesday, Nov 16-Friday, Nov 18.

In addition to promoting US institutions to Hondurans, the US Embassy is working to build long-term connections between US and Honduran institutions. In August, the US Department of State awarded a grant to Universidad Nacional de Agricultura and Louisiana State University to build a study abroad program for students of both institutions to receive degree credit, developing a cadre of American and Honduran students equipped with the necessary tools to succeed in agriculture in the 21st century. Furthermore, the US Embassy supported the UC-Merced-UNAH Agreement of Academic Cooperation signed in January of this year by providing scholarships for four graduate students from the University of California-Merced to attend the Third National Conference of Honduran Sociology in August. Exchange opportunities such as these open the door to further academic collaboration between United States and Honduras, moving forward future exchanges in both directions.

Open Doors is published by the Institute of International Education, an independent not-for-profit organization with a network of 19 offices and affiliates worldwide and over 1,200 member institutions. IIE has conducted an annual statistical survey of the international students in the United States since its founding in 1919 and in partnership with the U.S. Department of State’s Bureau of Educational and Cultural Affairs since 1972. Open Doors also reports on the number of international scholars at U.S. universities; international students enrolled in pre-academic Intensive English Programs; and on U.S. students studying abroad. Further details on the Open Doors 2016 surveys and their findings is on the Open Doors website.

The Bureau of Educational and Cultural Affairs (ECA) of the U.S. Department of State leads a wide range of academic, professional, and cultural exchanges that include approximately 40,000 participants annually, including the flagship Fulbright Program and the International Visitor Leadership Program, with the goal of increasing mutual understanding and respect between the people of the United States and the people of other countries.